I'll go ahead and say it, I don't like space.  As in, outerspace, the Moon, Mars, etc.  It makes me feel panicky.  There's just so much of it.  Not to mention that whole "no gravity" thing.  What is that about? I read somewhere once that $52/year from each American goes to support NASA.  I want my $52 back.  Seriously.  If it were up to me, we'd all just stay put right here on Earth.  (And don't bother to go all off on me about how backward-thinking that is and how if Christopher Columbus had thought that way, we'd all still be believing the world was flat and the moon was made of green cheese. I don't care.) 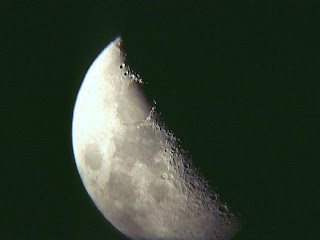 So you can imagine my surprise and dismay when earlier this week, Republican Presidential Candidate Newt Gingrich declared that, were he President, he would colonize the Moon.  And that's when he permanently lost my vote (not that he actually ever had it to begin with, but that's neither here nor there).  Not only would he colonize the Moon, but once it had 13,000 residents, he would give the Moon statehood.  Statehood!  As a resident of D.C., this particularly cheesed me off (see what I did there, Moon, cheese, get it?), considering that D.C. residents don't have statehood or even representation in Congress.  (FYI, this is not meant to be a political commentary, but a mini-dissertation on my space-hatred.)

The whole thing blows my mind on several levels.  First of all, does the U.S. even own the Moon?  Do we have the right to declare ownership (and thus colonize it)?  I'm not an expert in space law, or anything (or any law for that matter), but it certainly seems like we can't just call dibs on it because it might be fun to try.  Secondly, the mere thought that 13,000 people (or more) would want to go to the Moon . . . not just for a visit like that kid from NSYNC, but to live, really floors me.  Can you imagine having to walk around with that space suit and helmet on everyday?  Talk about bad hair. And imagine what it would do to the fashion industry, "This year from Kenneth Cole, the latest in space-travel chic." No thanks.

Now, if Newt wants to colonize the Moon, so be it, but not with my $52 a year.  My only caveat is that, should the Moon become a state, D.C. get to be one first.
Posted by WashingTina at 11:01 AM

WashingTina
A native Washingtonian's musings on life in the Nation's Capital.